Rathsaptami is one of the three occasions when procession of Goddess Shree Mahalaxmi Devi is taken in the surrounding areas. It is organised by the Rathsaptamikar samaj. After the procession there was mahaprasad followed by palanquin procession of Devi in the temple premises and aathis. 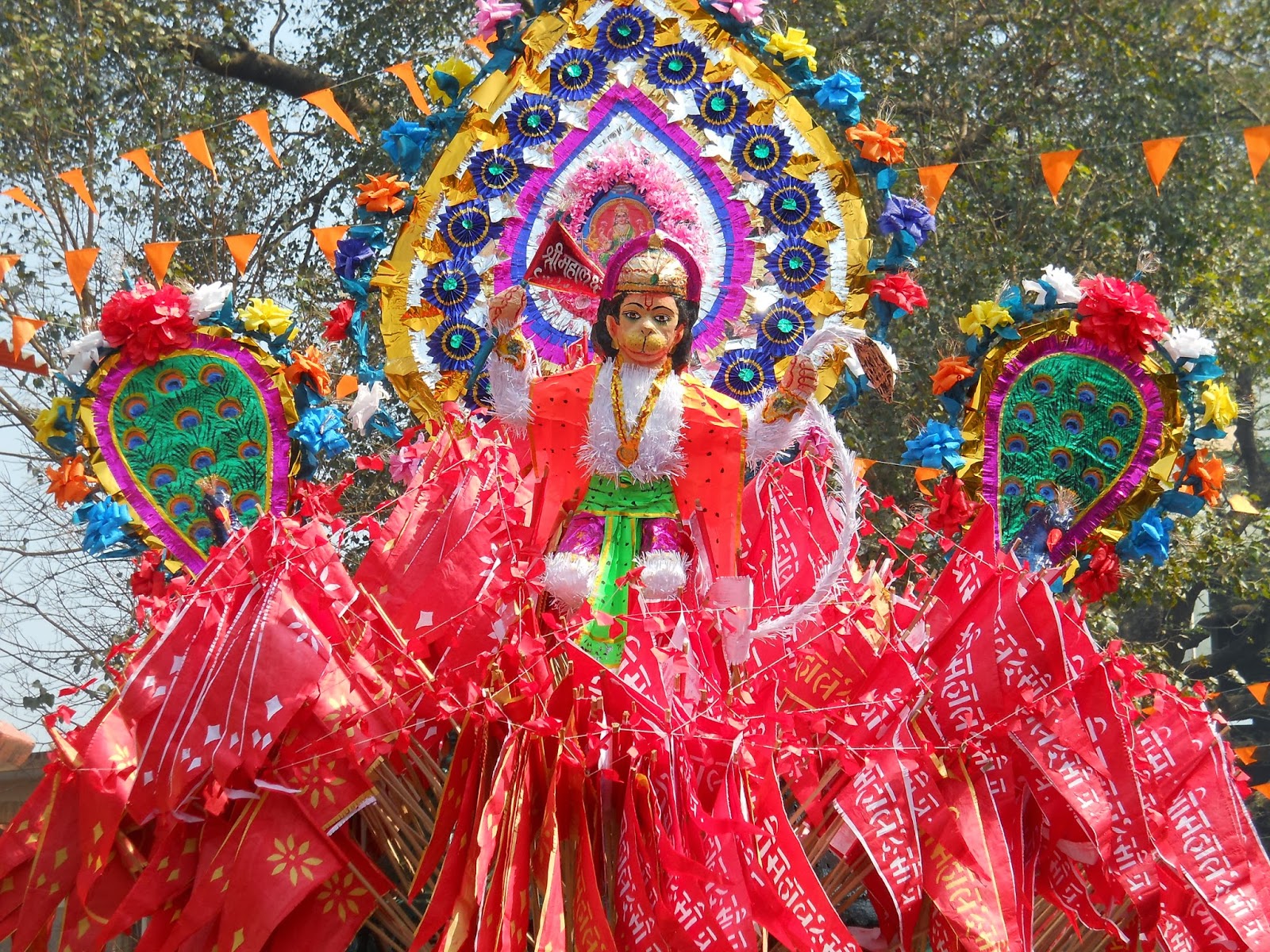 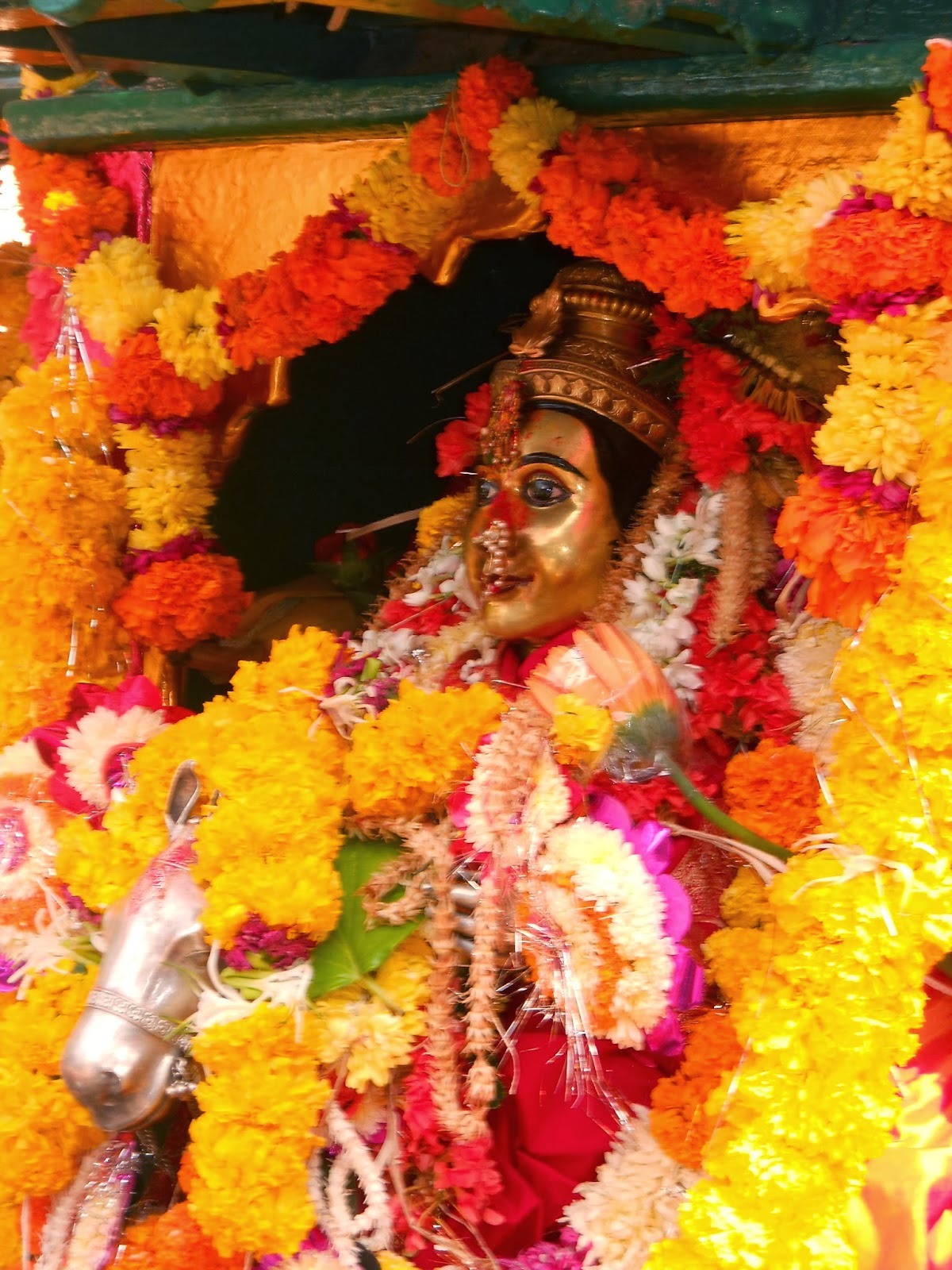 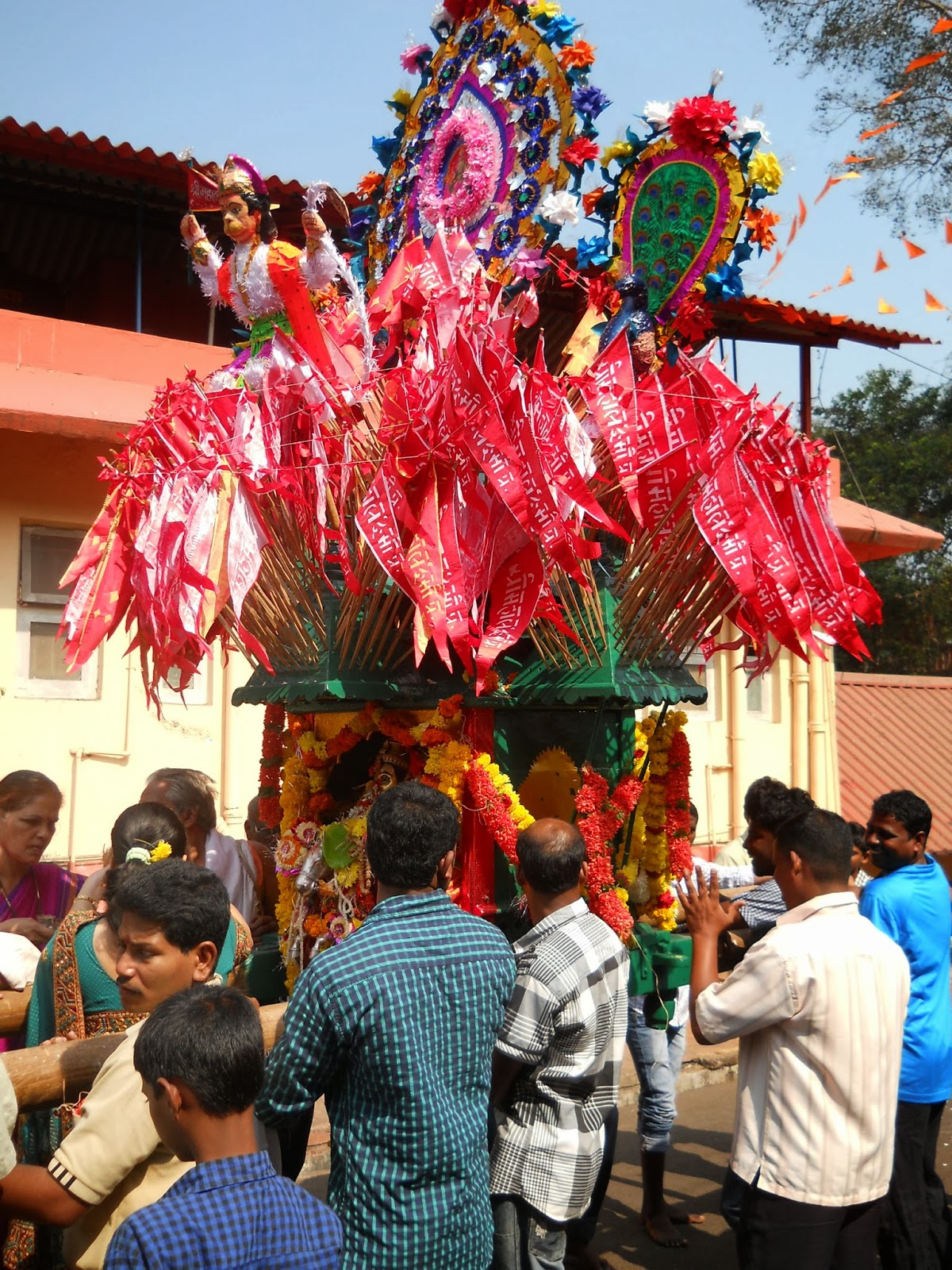 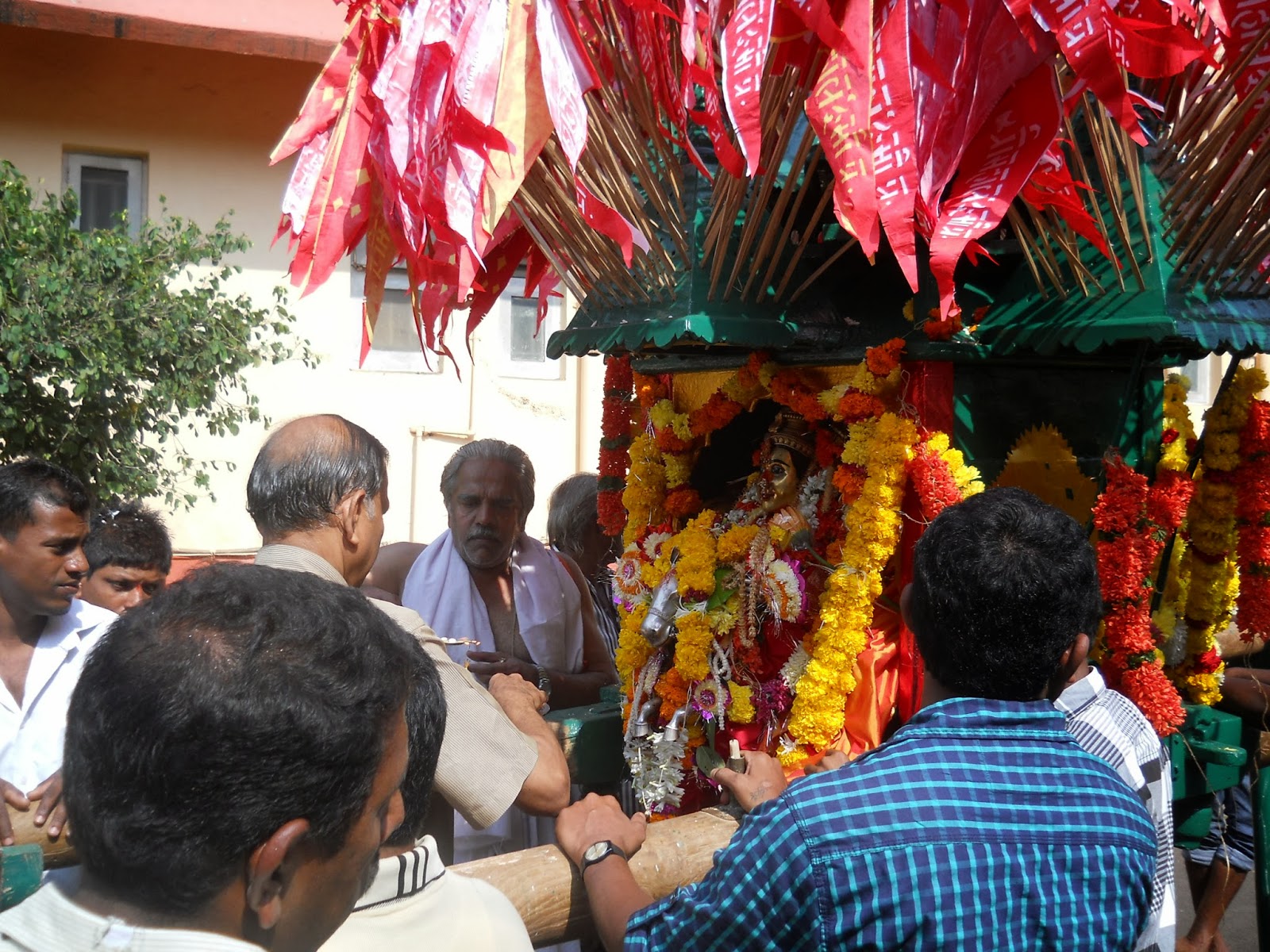 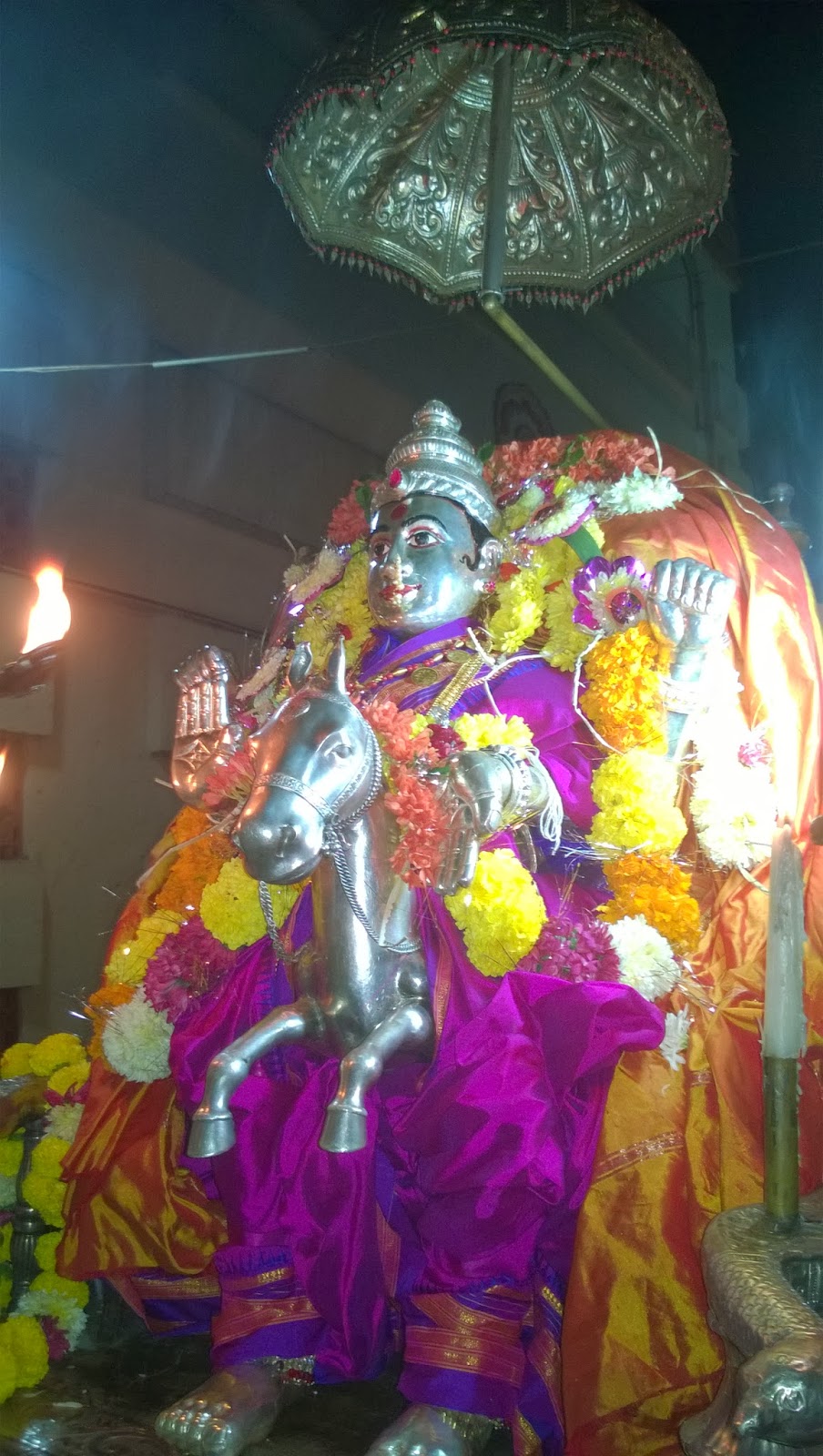 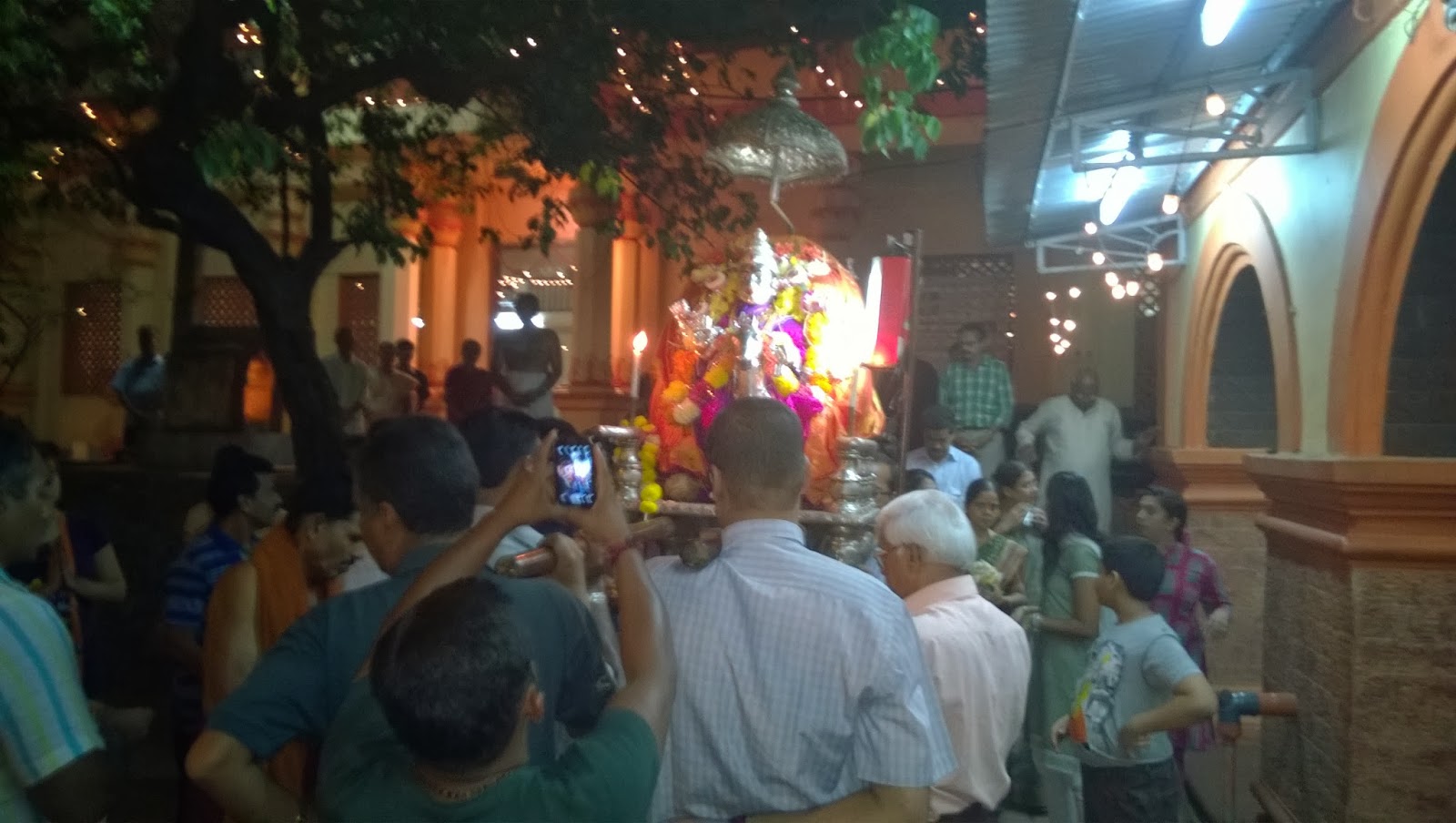 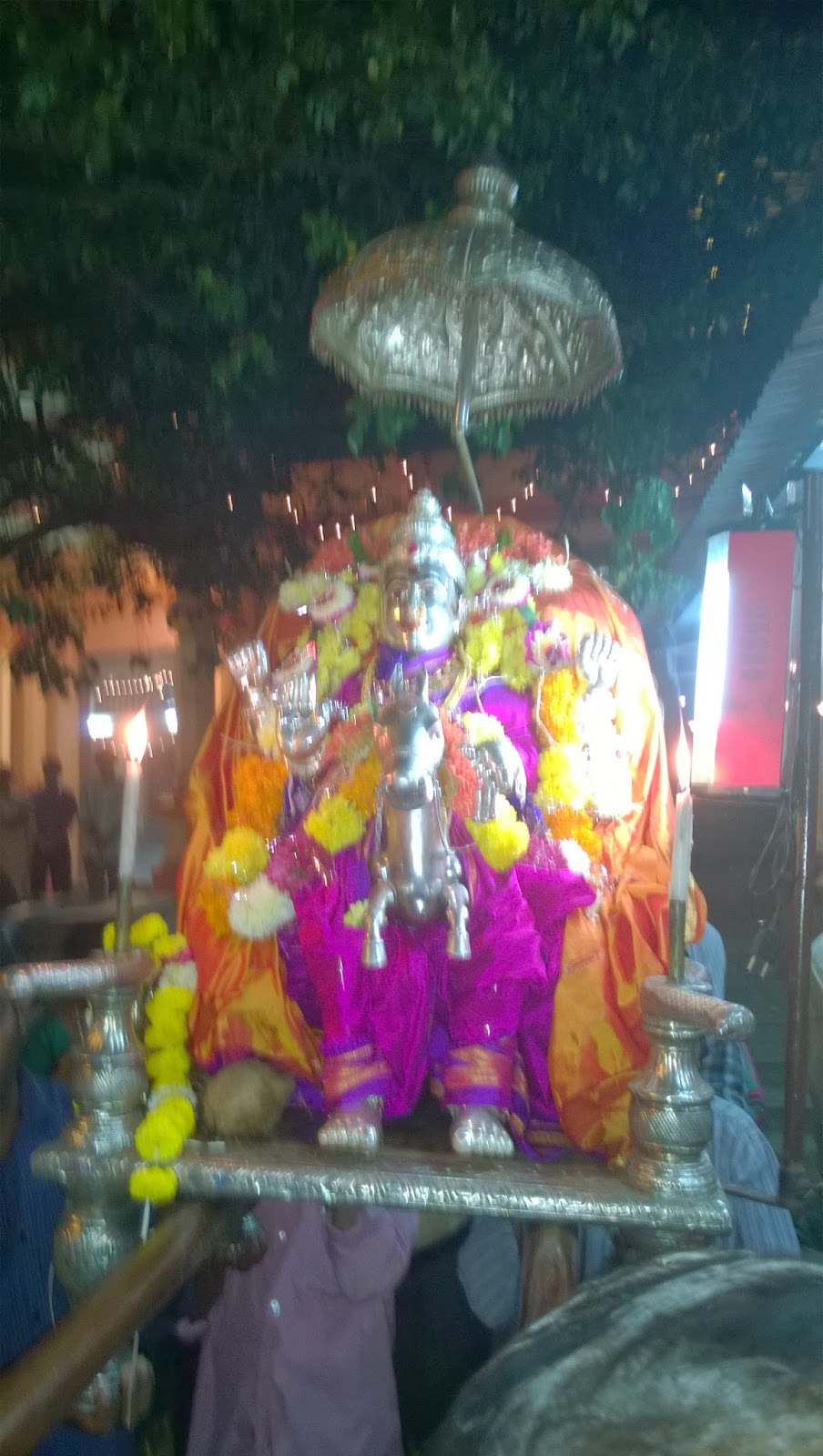 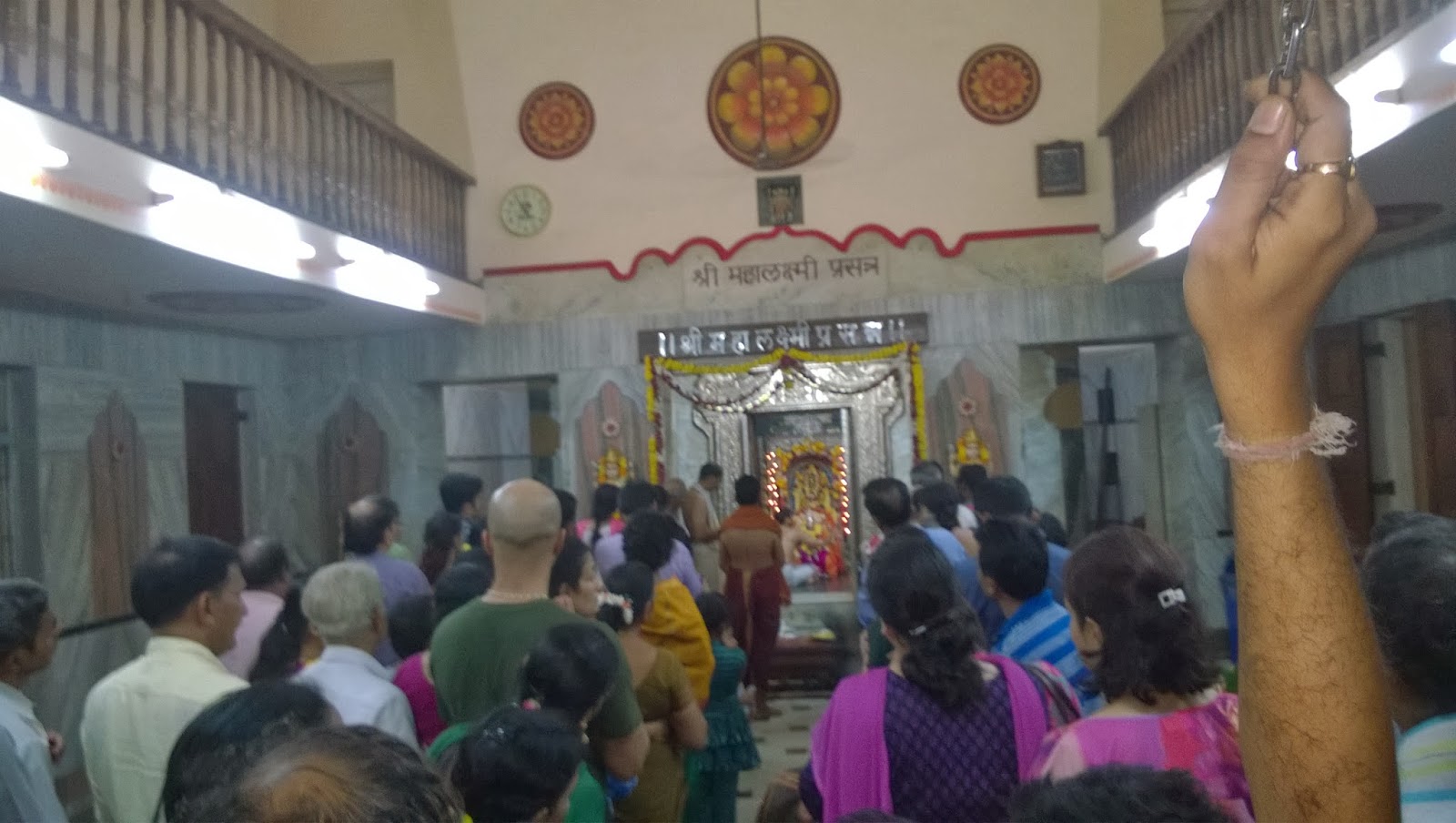 Posted by surajsgs at 10:17 No comments:

There are thousands of temples all over India in different size, shape and locations but not all of them are considered to be built the Vedic way. Generally, a temple should be located at a place where earth’s magnetic wave path passes through densely. It can be in the outskirts of a town/village or city, or in middle of the dwelling place, or on a hilltop. The essence of visiting a temple is discussed here.

Now, these temples are located strategically at a place where the positive energy is abundantly available from the magnetic and electric wave distributions of north/south pole thrust. The main idol is placed in the core center of the temple, known as “Garbhagriha” or Moolasthanam. In fact, the temple structure is built after the idol has been placed. This Moolasthanam is where earth’s magnetic waves are found to be maximum. We know that there are some copper plates, inscribed with Vedic scripts, buried beneath the Main Idol. What are they really? No, they are not God’s / priests’ flash cards when they forget the shlokas. The copper plate absorbs earth’s magnetic waves and radiates it to the surroundings. Thus a person regularly visiting a temple and walking clockwise around the Main Idol receives the beamed magnetic waves and his body absorbs it. This is a very slow process and a regular visit will let him absorb more of this positive energy. Scientifically, it is the positive energy that we all require to have a healthy life.

Further, the Sanctum is closed on three sides. This increases the effect of all energies. The lamp that is lit radiates heat energy and also provides light inside the sanctum to the priests or poojaris performing the pooja. The ringing of the bells and the chanting of prayers takes a worshipper into trance, thus not letting his mind waver. When done in groups, this helps people forget personal problems for a while and relieve their stress.

The fragrance from the flowers, the burning of camphor give out the chemical energy further aiding in a different good aura. The effect of all these energies is supplemented by the positive energy from the idol, the copper plates and utensils in the Moolasthanam / Garbagraham. Theertham, the “holy” water used during the pooja to wash the idol is not plain water cleaning the dust off an idol. It is a concoction of Cardamom,Karpura (Benzoin), zaffron / saffron, Tulsi (Holy Basil), Clove, etc…Washing the idol is to charge the water with the magnetic radiations thus increasing its medicinal values. Three spoons of this holy water is distributed to devotees. Again, this water is mainly a source of magneto-therapy.

Besides, the clove essence protects one from tooth decay, the saffron & Tulsi leafs protects one from common cold and cough, cardamom and Pachha Karpuram (benzoin), act as mouth fresheners. It is proved that Theertham is a very good blood purifier, as it is highly energized. Hence it is given as *prasadam* to the devotees. This way, one can claim to remain healthy by regularly visiting the Temples. This is why our elders used to suggest us to offer prayers at the temple so that you will be cured of many ailments. They were not always superstitious.
Yes, in a few cases they did go overboard when due to ignorance they hoped many serious diseases could be cured at temples by deities. When people go to a temple for the *Deepaaraadhana*, and when the doors open up, the positive energy gushes out onto the persons who are there. The water that is sprinkled onto the assemblages passes on the energy to all. This also explains why men are not allowed to wear shirts at a few temples and women are requested to wear more ornaments during temple visits. It is through these jewels (metal) that positive energy is absorbed by the women. Also, it is a practice to leave newly purchased jewels at an idol’s feet and then wear them with the idol’s blessings.
This act is now justified after reading this article. This act of “seeking divine blessings” before using any new article, like books or pens or automobiles may have stemmed from this through mere observation.Energy lost in a day’s work is regained through a temple visit and one is refreshed slightly. The positive energy that is spread out in the entire temple and especially around where the main idol is placed, are simply absorbed by one’s body and mind. Did you know, every Vaishnava(Vishnu devotees), “must” visit a Vishnu temple twice every day in their location.

Our practices are NOT some hard and fast rules framed by 1 man and his followers or God’s words in somebody’s dreams. All the rituals, all the practices are, in reality, well researched, studied and scientifically backed thesis which form the ways of nature to lead a good healthy life.The scientific and research part of the practices are well camouflaged with faith towards God which should be obeyed as a mark of respect so as to once again, avoid stress to the mediocre brains.
So now its up to us to decide whether we choose science as our reason of visiting temples or whether we  choose faith as our reason to visit the temple. In both cases we will be at profit.

Information Source: Facebook.
Posted by surajsgs at 10:39 No comments: 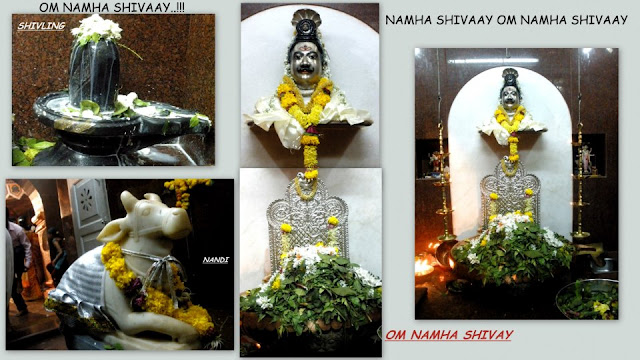 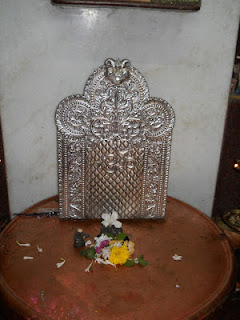 Mahashivaratri Festival is celebrated across the nation with devotion and religious fever on the moonless 14th night of the new moon in the Hindu month of Phalgun. Devotees observe fast all through the day and night of Shivaratri in honor of Lord Shiva and pay a visit to Shiva temples. Ritual bath of Shiva Lingam with milk, water, honey etc is also performed by the devotees as a part of the tradition.

Like all other Indians i too got up at early in the morning , had bath and proceeded towards Mahalaxmi devasthan Panaji-Goa, where just next to the main temple of Goddess Mahalaxmi is the small beautiful temple of Lord Shiva.
This year the festival day being Sunday devotees were more in no. ,Standing in que in a disciplined manner with  milk packets and flowers such as lotus, bilva patra (“bel” in konkani)etc. in their hands waiting for their turns to perform “Abhishek” and seek blessings of Lord Shiva.

It took me almost half an hour to reach inside the temple to take the “darshan” of Lord Shiva, followed by “ABHISHEK” on the “SHIVA LINGA” .
Thereafter there was a “mahaprasad” being served to the Purohits, Gaonkars(Panjikars) and devotees in the afternoon. 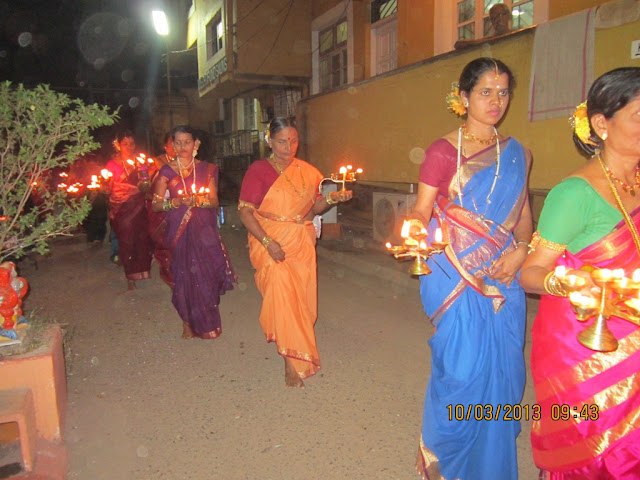 Later in the evening there was a “divja” procession in the vicinity of Mahalaxmi Temple, where the “SUHASINIS” –married women of Gaonkars(Panjikars) with a pancharart (five wicks lighted oil lamp) in their hands took  5 rounds of Mahalaxmi temple. This was followed by the palanquin procession of Goddess Shri Mahalaxmi in the temple vicinity after which there was a “bhar” of Gods Ravalnath, Rampurush , Grampurush in the bodies of Three Gaonkars(Panjikars) who gave blessings “Kaul” to the Gaonkar(Panjikar) family. 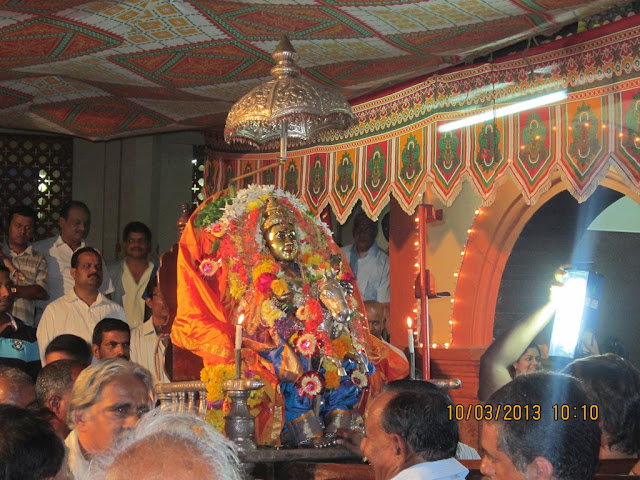 Posted by surajsgs at 11:27 No comments: 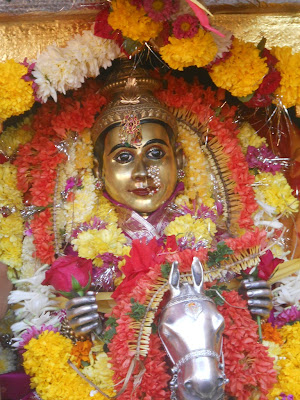 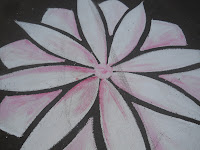 It was sunday 17th Feb 2012. I was very happy because it was Rathasaptami on that day and i could attend it without taking a leave from my office. It is only thrice a year when Goddess Shree Mahalaxmi of Panaji visits the houses of her devotees in the nearby temple vicinity(Dewul-wada, Boca-de-waca, Mushtifund Area), Rathasaptami being one of the occassion other then Chaitrapornima and Dussera. It was a joyous day for all the people in and around panaji. Devotees had nicely decorated the route of Goddess Shree Mahalaxmi's Ratha with orange color flags, rangolis etc. 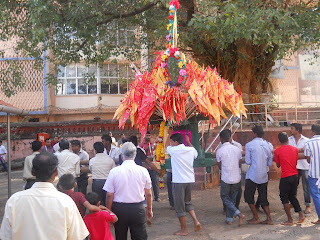 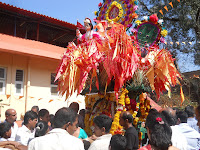 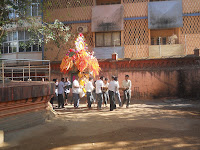 The Rath reached back in Temple at 6 pm. Later Goddess Shree Mahalaxmi's Idol from the rath was taken back in the temple on a lalkhi(similar to palkhi). Its a tradition that after Goddess Shree Mahalaxmi's idol is taken back in the temple the devotees remove the flags(gudi) from the Rath and take home. After that aartis were perform in all the temples. Every year after the Rath and aartis there is Mahaprasad being organised for the devotees by the Rathsaptamikar Samaj.  I got an opportunity to be a part of group who were voluntarily serving food to devotees. The Mahaprasad went on till 7.30pm 7.45 pm. Large amount of people attended it. Later in the evening there was Palanquin procession of Goddess Shree Mahalaxmi around the temple followed by aartis. 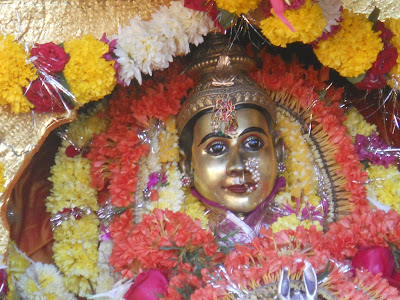 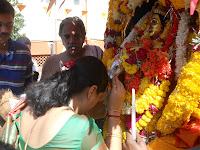 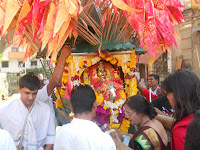 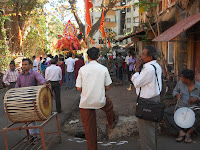 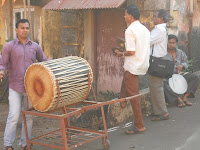 Posted by surajsgs at 10:30 No comments: 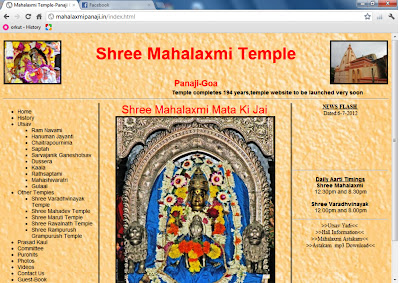 Today friday 6 july 2012 Shree Mahalaxmi Temple website was started in the hands of Shri. Narayan(baba) Kamat in the temple hall. The temple site is designed by me(Suraj Gurudas Sakhardande) as a seva to the our Gram-Devata Shree Mahalaxmi.

The site contains the history of the temple describing the series of events that took place before the temple was actually built at this currrent place. The site also contains the utsavs(festivals) celebrated in the temple, the process of taking prasad kaul, the managing committee along with the substitutes, the purohits(bhatji's) of the temple, photos and video gallery of  the temple etc. 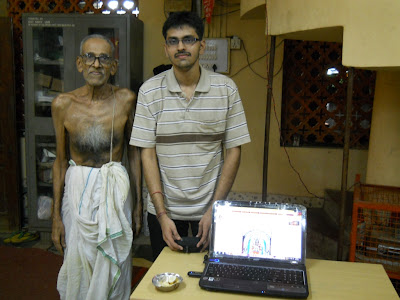 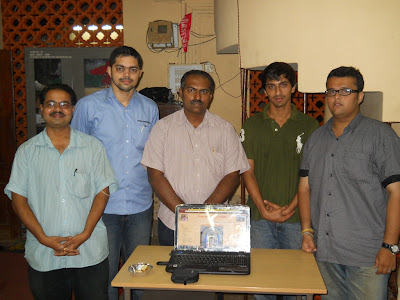 
Help has been taken from 2 books on the temple one written by Shri Vinayak Narayan Shenvi Dhume and one by Late Shri V.K Vaagh.

Posted by surajsgs at 10:43 No comments:


On 26th June 2012 Shree Mahalaxmi Saunthan celebrated 194th Vardhapan din of the temple with great enthusiasm.The temple was built in 1818 and renovated in 1983. Many devotees attended the arti at 12.30pm followed by mahaprasad.More than 250 devotees were present for the mahaprasad. The temple was decorated with flowers and lights.


Evening a bhajan programme was organised by the temple committee.The procession of Goddess Mahalaxmi in her palkhi started at 8.30pm followed by arti.